I have been reading about beards on the Catholic Encyclopedia. There is some very interesting information from a western point of view. Just some quotes:

Thus an ordinance of the Council of Toulouse, in 1119, threatened with excommunication the clerics who “like a layman allowed hair and beard to grow”, and Pope Alexander III ordained that clerics who nourished their hair and beard were to be shorn by their archdeacon, by force if necessary.

So laypeople beards, clergy no beard. And if the clerics do not like it – shave by force! The last part really made me laugh.

… the clergy “should not seem to be aping the fashions of military folk” or wearing flowing beards like goats (hircorum et caprarum more), or allowing the hair on their upper lip to impede their drinking of the chalice.

Beards like goats? Interesting terminology. But at least this suggests a practical reason behind the common practice of clean-shaven.

… in Eastern lands a smooth face carries with it the suggestion of effeminacy.

Hence the Orthodox clergy and monks with long beards.

Anyway, I might keep my beard. Not for religious reasons but because I am too lazy to shave. 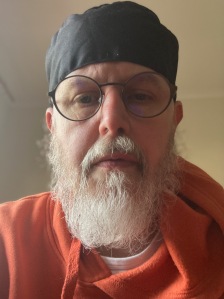 Moonroof open! All I can think about is that old joke, “you got enough room for a six pack and a pizza?”
My life is complete! #tea
Out and about for the first time in a couple of weeks.
Imagine you had to go into the desert for the rest of your life. What three books would you take?
#Jesus #Discipleship
#DesertFathers #ReligiousLife #AnglicanReligiousLife