The apostles gathered around Jesus, and told him all that they had done and taught. He said to them, “Come away to a deserted place all by yourselves and rest a while.” For many were coming and going, and they had no leisure even to eat. And they went away in the boat to a deserted place by themselves. Now many saw them going and recognized them, and they hurried there on foot from all the towns and arrived ahead of them. As he went ashore, he saw a great crowd; and he had compassion for them, because they were like sheep without a shepherd; and he began to teach them many things. … When they had crossed over, they came to land at Gennesaret and moored the boat. When they got out of the boat, people at once recognized him, and rushed about that whole region and began to bring the sick on mats to wherever they heard he was. And wherever he went, into villages or cities or farms, they laid the sick in the marketplaces, and begged him that they might touch even the fringe of his cloak; and all who touched it were healed.

I am always struck by how compassionate Jesus is in the gospels. Much more than me. It is something I aim to be but often fail. So, Lord, help me to be more like You!!! 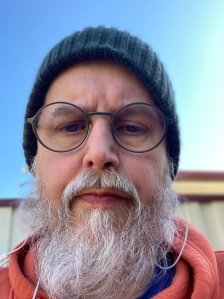 Today, one year ago, I started taking these!
Psalm Prayer for Ps 109.
A little cold but time for reading. (And some Miley Cryus!) Found another book on English anchorites.
#Kierkegaard in 1847 about #monasticism.
@sun_of_soren
Spot the #anchorite!?